The meeting of individualities is the most powerful driving force in the creative process that has pervaded my works since the company was founded. Through my current in-depth research on the woman’s body in movement, begun in 2013 with the piece for four dancers, Parallèle, the opportunity came up to delve into the mysterious, invisible bond that brings beings together. How can we describe that vital energy that pushes us, every day, to walk, breathe, laugh, love, and that invisibly connects us with so many others? Answering that question is the delicate task of choreographic art, which draws on its resources, primarily from the energy of hip hop and contemporary dance. The bond – vital, complex and fragile all at once, a source of global balance while impalpable – can reveal itself in the movement it permanently inhabits.

I invited two artists with explosive energy to meet each other for the first time. Sarah Cerneaux is a captivating and energetic dancer who performed in Kaash with Akram Khan and is currently working with the Liz Roche Company. Calligrapher Julien Breton, through his art, is a master of discipline and spontaneity, movement and painting. His movement is unique, precise, incisive. His semantic research leads towards a universal language that carries emotions beyond words.  Between these two beings and their own energy, dance is the natural vehicle to unite them.

What is special about these two artists, on top of the extraordinary quality of their movement, comes from their differences and the dichotomy between their personality in daily life and their attitude on stage. I find in them the gentleness and strength, which in a simplistic momentum very often defines each of the sexes as well as the vitality, force and intelligence of their body in movement.

I will use my work – a subtle blend in which the aesthetic of hip hop and contemporary dance are woven together – as a starting point to lead them to the borders of another universe. By pitting their energy and their techniques against each other, I want to impel them to transcend themselves and extend towards a form of osmosis, together, reinventing a shared language beyond artistic and stylistic borders.

It is in that thought process that the duo TRAIT D’UNION came about, inviting two beings from opposite worlds to dialogue with their differences in order to come up with a shared language. 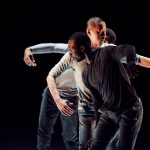 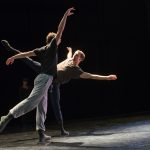